The music of the Classical period is the period in the development of European music approximately between 1730 and 1820.

The concept of classicism in music is steadily associated with the work of Haydn, Mozart and Beethoven, who are called the Viennese classics and determined the direction of further development of musical composition. 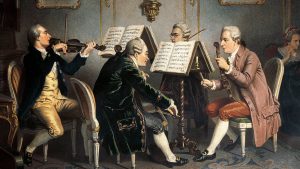 It was during this period that the sonata form was finally formed, based on the development and opposition of two contrasting themes, and the classical composition of parts of the sonata and symphony was determined.

During the period of classicism, a string quartet appeared, consisting of two violins, a viola and a cello, and the composition of the orchestra expanded significantly.

Romanticism is an ideological and artistic trend in European and American culture of the late 18th – 1st half of the 19th centuries.

In music, romanticism was formed in the 1820s. and retained its significance until the beginning of the 20th century. The leading principle of romanticism is the sharp opposition between everyday life and dreams, everyday existence and the higher ideal world created by the creative imagination of the artist.

Initially, romanticism acted as a principled opponent of classicism. The ancient ideal was opposed by the art of the Middle Ages, distant exotic countries. Romanticism discovered the treasures of folk art – songs, tales, legends. However, the opposition of romanticism to classicism is still relative, since the romantics accepted and developed further the achievements of the classics. Many composers were greatly influenced by the work of the last Viennese classic, L. Beethoven. 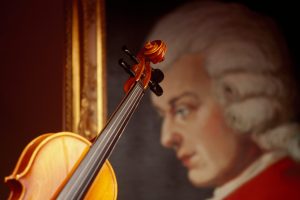 For a romantic musician, the process is more important than the result, more important than the achievement. On the one hand, they gravitate towards the miniature, which they often include in the cycle of other, as a rule, diverse plays; on the other hand, they affirm free compositions, in the spirit of romantic poems. It was the Romantics who developed a new genre – the symphonic poem. The contribution of romantic composers to the development of the symphony, opera, and ballet is also extremely great.

Among the composers of the 2nd half of the 19th – early 20th centuries, in whose work romantic traditions contributed to the establishment of humanistic ideas, are I. Brahms, A. Bruckner, G. Mahler, R. Strauss, E. Grieg, B. Smetana, A Dvorak and others

Almost all the great masters of Russian classical music paid tribute to romanticism in Russia. The role of the romantic worldview is great in the works of the founder of Russian musical classics, M. I. Glinka, especially in his opera Ruslan and Lyudmila.

In the work of his great successors, with a general realistic orientation, the role of romantic motifs was significant. They were reflected in a number of fabulous-fantastic operas by N. A. Rimsky-Korsakov, in symphonic poems by P. I. Tchaikovsky and the composers of The Mighty Handful.

The romantic beginning permeates the works of A. N. Scriabin and S. V. Rachmaninov.