Beethoven never thought of his 32 piano sonatas as a single cycle. However, in our perception, their internal integrity is undeniable. Playing and listening to sonatas, together with the master, we go a long way from youthful attempts to “storm heaven” (Beethoven’s own expression) to mystical merging with God and Cosmos in the final part of the last sonata.

Even for Haydn and Mozart, the piano sonata genre did not mean so much and did not turn into either a creative laboratory or a kind of diary of intimate impressions and experiences. The uniqueness of Beethoven’s sonatas is partly due to the fact that, trying to equate this previously purely chamber genre with a symphony, a concerto and even a musical drama, the composer almost never performed them in open concerts. Piano sonatas remained for him a deeply personal genre, addressed not to abstract humanity, but to an imaginary circle of friends and like-minded people. However, each of us has the right to enter this circle, bringing something new and unique to the perception of Beethoven’s sonatas. 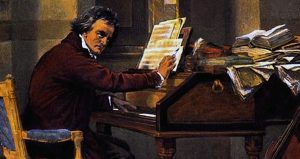 32 sonatas cover almost the entire creative path of the master. He began working on the first three sonatas (opus 2) dedicated to Joseph Haydn in 1793, shortly after moving from Bonn to Vienna, and completed the last two in 1822. And if some themes from very early compositions (three quartets of 1785), the later ones have points of contact with the Solemn Mass (1823), which Beethoven considered his greatest creation.

The first group of sonatas (Nos. 1-11), created between 1793 and 1800, is extremely heterogeneous. The leaders here are “grand sonatas” (as the composer himself designated them), which are not inferior in size to symphonies, but in difficulty exceed almost everything written for the piano at that time. These are the four-part cycles opus 2 (Nos. 1-3), opus 7 (No. 4), opus 10 No. 3 (No. 7), opus 22 (No. 11). Beethoven, who in the 1790s won the laurels of the best pianist in Vienna, declared himself as the only worthy heir to the deceased Mozart and the aging Haydn. Hence – the boldly polemical and at the same time life-affirming spirit of most of the early sonatas, the courageous virtuosity of which clearly went beyond the capabilities of the then Viennese pianos with their clear, but not strong sound. However, in Beethoven’s early sonatas, the depth and penetration of the slow parts is also amazing. “Already at the age of 28, I was forced to become a philosopher,” Beethoven later complained, recalling how his deafness began, at first imperceptible to those around him, but painting the artist’s worldview in tragic tones. The author’s title of the only program sonata of these years (“Pathetic”, No. 8) speaks for itself.

After the militantly exemplary Sonata No. 11, Beethoven declared: “I am dissatisfied with my previous works, I want to embark on a new path.” In the sonatas of 1801-1802 (Nos. 12-18), this intention was brilliantly realized. The idea of ​​a sonata-symphony was replaced by the idea of ​​a sonata-fantasy. The two sonatas opus 27 (Nos. 13 and 14) are expressly marked “quasi una fantasia”. However, this designation could be prefixed to other sonatas of this period. It is as if Beethoven is trying to prove that the sonata is more of an original concept than a frozen form, and it is quite possible for a cycle that opens with variations and includes, instead of the traditional slow movement, the strict “Funeral March for the Death of a Hero” (No. 12) – or, conversely, the cycle of sonata No. 14, at the beginning of which a piercing-confessional Adagio sounds, which evoked in the romantic poet Ludwig Relshtab the image of a lake at night, illuminated by moonlight (hence the non-authorial name “Moonlight Sonata”). Completely devoid of drama, Sonata No. 13 is no less experimental: it is a divertissement of almost kaleidoscopically changing images. On the other hand, Sonata No. 17, with its tragic monologues, dialogues and wordless recitatives, is close to opera or drama. According to Anton Schindler, Beethoven associated the content of this sonata (as well as the Appassionata) with Shakespeare’s The Tempest, but refused to give any explanation.

Even the more traditional sonatas of this period are unusual. Thus, the four-movement sonata No. 15 no longer claims to be related to the symphony and is rather sustained in gentle watercolor tones (it is not by chance that the name “Pastoral” was assigned to it). Beethoven greatly valued this sonata and, according to his student Ferdinand Ries, was especially willing to play the restrained melancholy Andante.

Another four-movement sonata, No. 18, has a unique cycle in which there is no slow movement, but there is both a scherzo and a minuet. Beethoven repeated a similar decision later in his Eighth Symphony (1813).