The culminating period of Beethoven’s work is considered to be the years 1802-1812, and the few sonatas of these years also belong to the pinnacle of the master’s achievements. Such, for example, was created in 1803-1804, in parallel with the Heroic Symphony, Sonata No. 21 (opus 53), which is sometimes called “Aurora” (after the goddess of the morning dawn). It is curious that initially between the first movement and the finale there was placed a beautiful, but extremely extended Andante, which Beethoven, after mature reflection, published as a separate piece (Andante favori – that is, “The Beloved Andante”, WoO 57). The composer replaced it with a short gloomy intermezzo, connecting the bright “daytime” images of the first movement with the gradually brightening colors of the finale.

The complete opposite of this radiant sonata is Sonata No. 23 (opus 57) written in 1804-1805, which received the name “Appassionata” from the publishers. This is a composition of great tragic power, in which the pounding “motif of fate”, which was later used in the Fifth Symphony, plays an important role.

Sonata No. 26 (opus 81-a), created in 1809, is the only one of 32 that has a detailed author’s program. Its three parts are entitled “Farewell – Separation – Return” and look like an autobiographical novel that tells about parting, longing and a new meeting of lovers. However, according to the author’s note, the sonata was written “on the departure of His Imperial Highness the Archduke Rudolf” – a student and patron of Beethoven, who on May 4, 1809, was forced to hastily evacuate Vienna with the imperial family: the city was doomed to siege, shelling and occupation by troops Napoleon. In addition to the Archduke, almost all of Beethoven’s close friends and girlfriends left Vienna at that time. Perhaps among them was the true heroine of this novel in sounds.

The two-movement sonata opus 90 (No. 27), written in 1814 and dedicated to Count Moritz Lichnowsky, who had the courage to fall in love with an opera singer and enter into an unequal marriage with her, also has an almost romantic character. According to Schindler, Beethoven defined the character of the confused first movement as “a struggle between the heart and reason”, and the second compared the gentle, almost Schubertian music with “the conversation of lovers”.

The last five sonatas (Nos. 28-32) belong to the late period of Beethoven’s work, marked by the mysteriousness of content, unusual forms and the utmost complexity of the musical language. These very different sonatas are also united by the fact that almost all of them, except for No. 28 (opus 101), written in 1816, were composed based on the virtuosic and expressive capabilities of a new type of piano – a six-octave concert grand piano of the English firm “Broadwood”, received by Beethoven a gift from this firm in 1818. The rich sonic potential of this instrument was most fully revealed in the grandiose sonata opus 106 (No. 29), which Hans von Bülow compared with the Heroic Symphony. For some reason, the name Hammerklavier (“Hammer Piano Sonata”) was assigned to it, although this designation is on the title pages of all later sonatas. 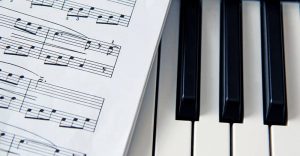 In most of them, the idea of ​​a fantasy sonata with a freely arranged cycle and whimsical alternation of themes takes on a new breath. This evokes associations with the music of the romantics (Schumann, Chopin, Wagner, Brahms, and even Prokofiev and Scriabin are heard every now and then) … But Beethoven remains true to himself: his forms are always impeccably built, and the concepts reflect his inherent positive worldview. The romantic ideas of disappointment, restlessness and discord with the outside world that spread in the 1820s remained alien to him, although their echoes can be heard in the music of the mournful Adagio from Sonata No. 29 and the suffering Arioso dolente from Sonata No. 31. And yet, despite the tragedies experienced and catastrophes, the ideals of goodness and light remain unshakable for Beethoven, and reason and will help the spirit to triumph over suffering and earthly vanity. “Jesus and Socrates were my models,” Beethoven wrote in 1820. The “hero” of the later sonatas is no longer a victorious warrior, but rather a creator and philosopher, whose weapons are all-pervading intuition and all-encompassing thought. It is not for nothing that two of the sonatas (Nos. 29 and 31) end with fugues demonstrating the power of the creative intellect, while the other two (Nos. 30 and 32) end with contemplative variations, representing, as it were, a model of the universe in miniature.

The great pianist Maria Veniaminovna Yudina called Beethoven’s 32 sonatas the “New Testament” of piano music (“The Old Testament” was Bach’s “Well-Tempered Clavier” for her). Indeed, they look far into the future, not at all denying the 18th century that gave birth to them. And therefore, each new performance of this gigantic cycle becomes an event in modern culture.