Prehistoric, or primitive, is commonly referred to as an oral musical tradition.

The term “prehistoric” is usually applied to the musical tradition of the ancient European peoples, and in relation to the music of representatives of other continents, other terms are used – folklore, traditional, folk.

The first musical sounds are human imitations of the voices of animals and birds during the hunt. And the first ever musical instrument is the human voice. With the effort of the vocal cords, even then a person could masterfully reproduce sounds in a wide range: from the singing of exotic birds and the chirping of insects to the roar of a wild beast. 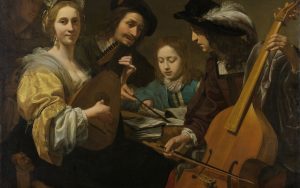 The first prehistoric musical instrument, the existence of which is officially confirmed by archaeologists, is the flute. In its original form, it was a whistle. The whistling tube acquired finger holes and became a full-fledged musical instrument, which was gradually improved to the form of a modern flute. Flute prototypes were found during excavations in southwestern Germany, dating back to the period of 35-40 thousand years BC.

Music of the ancient world

The prehistoric era ends with the transition to a written musical tradition.

The oldest known song recorded on a cuneiform tablet was found at the excavations of Nippur, it dates back to 2000 BC. e. The tablet was deciphered by Professor A. D. Kilmer of the University of Berkeley, and was also shown to be composed in thirds and using the Pythagorean tuning.

Double trumpets, such as those used, for example, by the ancient Greeks, and ancient bagpipes, as well as a review of ancient drawings on vases and walls, and ancient writing (see, for example, Aristotle’s “Problems”, Book XIX.12[4]), which describes the musical technique of that time, point to polyphony. One pipe in the aulos probably provided the background, while the other played melodic passages. Instruments such as the seven-hole flute and various types of stringed instruments have been found from the Indus Valley Civilization. 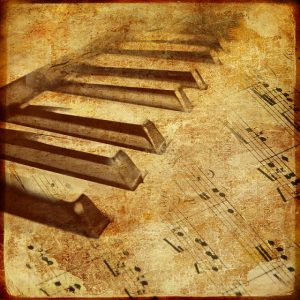 Mentions of Indian classical music (marga) can be found in the scriptures of the Vedas. The Sama Veda, one of the four Vedas, describes music in detail. The history of music in Iran (Persia) dates back to the prehistoric era. The legendary great king, Jamshid, is credited with inventing music. Music in Iran can be traced back to the days of the Elamite Empire (2500-644 BC). Fragmentary documents from various periods of the country’s history show that the ancient Persians had an extensive musical culture. The Sasanian period (226-651 CE), in particular, has left us with a wealth of evidence indicating a lively musical life in Persia. The names of some important musicians such as Barbaud, Nakissa and Ramtin, as well as the titles of some of their works, have been preserved.

On the walls of the pyramids, in ancient papyri, in the collections “Pyramid Texts” and “Book of the Dead” there are lines of religious hymns. There are “passions” and “mysteries”. A popular plot was the “passion” of Osiris, who died and resurrected every year, as well as women’s lamentation songs over the dead Osiris. The performance of songs could be accompanied by dramatic scenes.

The most ancient musical instruments of the Egyptians were the harp and the flute. During the New Kingdom period, the Egyptians played bells, tambourines, drums and lyres imported from Asia. Wealthy people held receptions with the invitation of professional musicians.

It is believed that it was in ancient Greece that music reached its peak in the culture of the ancient world. The word “music” itself is of ancient Greek origin. In ancient Greece, for the first time, a regular relationship was noted between the pitch and the number, the discovery of which tradition attributes to Pythagoras.

The growth of policies, in which great religious and civil holidays took place, led to the development of choral singing to the accompaniment of a wind instrument. Together with the aulos, a metal pipe came into use. Constant wars stimulated the development of military music. At the same time, lyric poetry also developed, which was sung to the accompaniment of musical instruments. Notable songwriters include Alcaeus, Archilochus, and Sappho.

The poet and musician Pindar, the author of hymns, drinking and victory odes, distinguished by a variety of forms, richness and quirkiness of rhythms, became a classic of choral lyrics. On the basis of the hymns of Pindar, dithyrambs developed, which were performed at the Dionysian festivals (about 600 BC).

Music was an integral part of theatrical performances. The tragedy combined drama, dance and music. The authors of tragedies – Aeschylus, Sophocles, Euripides, like the ancient Greek lyric poets, were at the same time the creators of music. As the tragedy developed, the musical parts of the coryphaeus and actors were introduced.

Euripides in his works limited the introduction of choral parts, focusing on the solo parts of actors and luminaries, modeled on the so-called new dithyramb, which was distinguished by great individualization, emotionality, mobile, virtuoso character.