The music of the Middle Ages is a period of development of musical culture, covering a period of time approximately from the 5th to the 14th century AD.

In the era of the Middle Ages, a new type of musical culture was formed in Europe – feudal, combining professional art, amateur music-making and folklore.

Since the church dominates in all areas of spiritual life, the basis of professional musical art is the activity of musicians in churches and monasteries.

Secular professional art was initially represented only by singers who created and performed epic tales at court, in the homes of the nobility, among warriors, etc. (bards, skalds, etc.). The consolidation, preservation and dissemination of traditions and standards (but also their gradual renewal) was facilitated by the transition from neumes, which only approximately indicated the nature of the melodic movement, to linear notation (Guido d’Arezzo, XI century), which made it possible to accurately fix the pitch of tones, and then their duration.

In Western Europe from the VI-VII centuries. a strictly regulated system of monophonic (monodic) church music is being formed on the basis of diatonic modes (Gregorian chant), which combines recitation (psalmody) and singing (hymns).

At the turn of the 1st and 2nd millennium, polyphony is born. New vocal (choir) and vocal-instrumental (choir and organ) genres are being formed: organum, motet, conduct, then mass. In France, in the 12th century, the first composer (creative) school was formed at the Notre Dame Cathedral (Leonin, Perotin).

At the turn of the Renaissance (ars nova style in France and Italy, XIV century), in professional music, monophony was replaced by polyphony, music began to gradually free itself from purely practical functions (serving church rites), the importance of secular genres, including song genres (Guillaume de Masho). 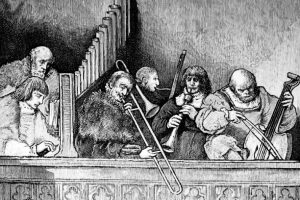 In Eastern Europe and Transcaucasia (Armenia, Georgia), their own musical cultures are developing with independent systems of modes, genres and forms.

At the same time, in the East (the Arab Caliphate, the countries of Central Asia, Iran, India, China, Japan), a feudal musical culture of a special type was being formed. Its signs are the widespread dissemination of secular professionalism (both courtly and folk), acquiring a virtuoso character, limitation to oral tradition and monodic (melody without accompaniment) forms, which, however, achieve high sophistication in terms of melody and rhythm, the creation of very stable national and interethnic systems of musical thinking that combine strictly defined types of modes, genres, intonation and compositional structures (mugams, maqams, ragas, etc.).